After some consideration and timing (we didn’t want to enter Syria on a Friday) we decided to cross the border at Jaber. This border crossing is bigger, busier and ‘less friendly’ than the border at Daraa where we initially wanted the cross. This border is close to Daraa city where all the trouble started in the first place and thus maybe not the safest place to cross.

We were stamped out of Jordan in no time, but it started to get exciting on the Syrian side. We’ve heard stories from other travelers they were refused at this border and we could be facing the same. One of the conditions be given access to Syria is that you haven’t been to Israel prior to your visit. It took two different officials about 30 minutes to check our passports and, because they couldn’t find anything they started looking at our Carnet de Passage. Ten minutes later the officer jumped out of his seat with a smile! We asked him if everything was ok and he stated it was not. He had found a suspicious stamp, but after pointing out this was Ethiopia he seemed to be disappointed!! Still he wasn’t planning on stamping us in. He just couldn’t understand how we reached Saudi from Sudan. We tried to explain that we took the ferry, but that word didn’t ring a bell. Also words like ‘’sea’’ and ‘’boat’’ couldn’t convince him. Eventually we took out some pictures and Jenn showed our ferry tickets to explain the situation. We got our stamps and after paying a hefty 100US diesel tax, 55US insurance and another 9US roadtax we could proceed.

In Bosra, an ancient city, it was quiet, almost deserted. We walked into the old theatre and the guy behind the counter told us we were the first tourist he came across in two months. Inside we met a guide who explained the whole situation and described the problems Syria is facing and what seems to come. Since the only hotel in town was closed, we stayed in a room at a small restaurant.

The next day we went towards Palmyra, but along the way we decided it was perhaps better to go towards the coast. We by-passed Homs and in the afternoon we reached the beautiful castle ‘Crac de Chevaliers’. This castle build in 1936 is well intact and situated on top of a hill. Next to the castle there was a restaurant with attached parking where we could camp. The owner, happy to see us, told us he had a Dutch friend who happened to be there. Nouri, originally from Syria, had lived in Germany for most of his life, but was now living and working in Scheveningen. He kindly offered us to stay in one of the 4 rooms he rented for his family. Nouri was staying in his holiday home nearby and brought all his family from Homs over because of the trouble in that city.

Nouri’s brother Jodat and his family welcomed us with open arms. They didn’t speak any English and our Arabic is even worse, but we understood each other perfectly. We ended up spending two days with these lovely people.

From the castle we headed to Lattakia and crossed the border into Turkey. But before we could leave we had to pay another 32US for exporting diesel (there was hardly any diesel available in Syria!!) and an exit fee. Such a shame the Syrian government overcharges tourist in such a way, even now tourism facing a bad time and so many people lost their jobs. 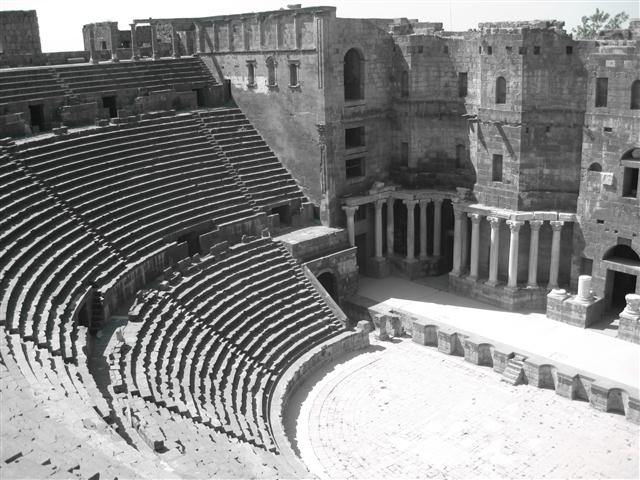 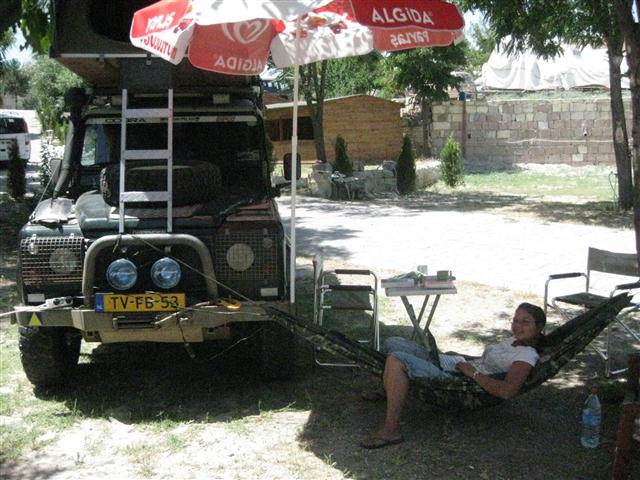 It felt good to be in Turkey again. People were friendly as ever and we even got some peaches with our stamps. It got even better when we stopped at a picnic area to put away our documents. Hardly parked we got approached by a man who invited us to sit with his wife and 3 daughters. The eldest daughter spoke some English and asked us whether we would like to come to their house. They just finished their picnic, eating all the kebab, but mom wanted to cook for us! We decided to accept the invitation, so with mom and a daughter in the back of the Landrover we followed them home. Within 20 minutes the table was filled with chicken, pepperbread, pizza, salad, french fries and more. What a hospitality! Some neighbours dropped by as well and that night we slept on the couch in the living room. What a great start to enter Turkey…

After a (rather long) visit to the bank to change some dollars and buying a sim-card we left our new friends and went to Iskenderun where we camped near the beach. From there we drove towards Urgup where we found a great Boutique hotel to celebrate Jenn’s birthday.

We spent a few days in beautiful Cappadocia, but we didn’t really felt like sightseeing anymore and had lazy days at our campsite. But still we kind a forced ourselves to visit Goreme Open Air Museum, which we shouldn’t have done. It was crowded with tour groups, buses and guides everywhere and we were a bit disappointed and so we left after 30 minutes already. I guess we have seen too much…

We decided to drive to Istanbul where we were invited at Seyhun’s place. We met Seyhun 3 years ago at the beginning of our trip and were still in touch and met up again. We had a brilliant time together, thank you Seyhun!

Now we only have to drive 2764 km and then we will be HOME! But first we are gonna see a bit of Bulgaria, Serbia, Hungary, Austria and Germany…

“Twenty years from now you will be more disappointed by the things you didn’t do, than by the ones you did. Sail away from the safe harbour. Catch the wind in your sails. Explore. Dream. Discover.” — Mark Twain