Together with our South African friends, William and Karen a.k.a. ‘White Rhino’ we arrived in Ethiopia’s capital, Addis Ababa. We went straight for ‘Wims Holland House’ and ordered ‘bitterballen’, what a treat! The following days we went around town to get some spares and did an oil change.  It was great to meet fellow (Dutch) travelers and listen to Wims amazing stories, but after a few days it was time for us to leave to Lalibela.

This time we left, together with Marly & Dave, a Dutch couple who were in a serious motorbike accident in Sudan a few weeks earlier.  Dave was recovering at Wims and they planned to continue their trip to South-Africa, but a new X-ray showed a broken wrist and leg on top of the previous injury, a dislocated arm. That explained why it was still sore and swollen. Dave was told that he couldn’t ride the motorbike soon and so we decided to bring them along and explore Ethiopia together. 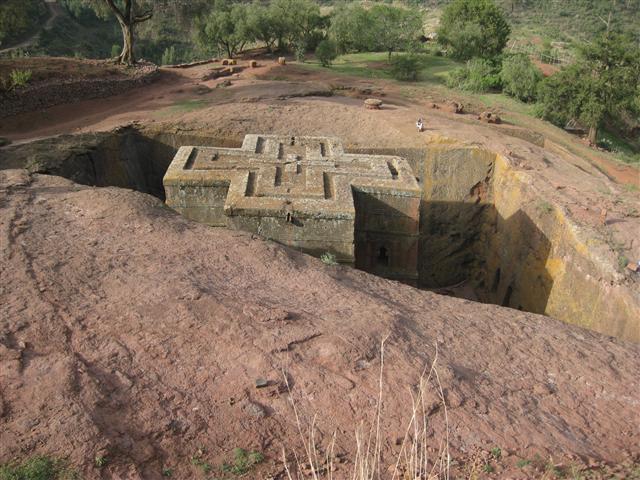 Lalibela is a historical site with 11 stunning rock-hewn churches which were built during King Lalibela’s reign in the 12h or 13th century. Prince was a local guide who showed us around, but at the end the guide book could told us more than he did ;-) On the day we visited the churches there happen to be a very special ceremony, Kings Lalibela birthday. That day we shot hundreds of pictures and after a hard day sightseeing we would go back to have a meal with our new friends from Unique restaurant. We had some of our best Ethiopian and Western style meals at this little place!

We would have loved to go to the Danakil Depression the only place where you are still able to get close to a volcano eruption. But because of a volcano eruption in Eritrea it was dangerous to go there. Ah well, the decision has been made for us and we were actually fine with it. Visiting the Danakil is quite expensive, we had to bring guards, it takes a few days and since it’s lying 100m below sea level it’s about the hottest place on earth!

So after Lalibela we decided to drive straight to Gonder to visit the Royal Enclosure, a 70.000 square meter compound containing castles and palaces and even lion cages. This area was made a World Heritage Site in 1979. At the Belegez hotel we met another overland couple in a 110; Louise and Guy who are making their way down to Cape Town.

Together with Louise, Guy, Marly and Dave we went into Simien Mountains. We spend the night at Debark, which serves as a good point to explore the surrounding mountains, but isn’t the nicest place in Ethiopia. The following day we found out that last night’s dinner wasn’t the most hygienic which made that Guy couldn’t come at all. This time he was condemned to the white bowl.

We had to bring an armed scout and so the five(!) of us had to squeeze in the Landrover! We made it up to misty and rainy Chennek where we spent a cold, rainy night with lots of lightning and thunder. The following day we got up early to climb Mt. Bwahit (4430m). It took us 3 hours to reach the top. Along the way we saw a lot of gelada baboons and the magnificent Walia Ibex (member of a wild goat).

The same day, after the hike we pushed to Gorgora, homeground of Tim & Kim’s village, a community based village, initiated and managed by Dutchies Tim and Kim. This is probably the one and only (proper) campsite in Ethiopia, with good food and a great bar. A fantastic spot to say goodbye to Ethiopia before heading into the heat of Sudan.

“Twenty years from now you will be more disappointed by the things you didn’t do, than by the ones you did. Sail away from the safe harbour. Catch the wind in your sails. Explore. Dream. Discover.” — Mark Twain