In Tanzania we applied for our Rwandan visa online. Within 24 hours we got an approval for a visa valid for 15 days. With an approval print-out and US$ 60 we got our visa stamped at the border in Rusumo, a hassle free border crossing.

After changing some money at the local exchange bureau we were off.  Waiting on the left-hand side of the road for the gate to be opened, the officer reminded us to drive on the right side and made us aware of the one hour time difference. We are definitely less prepared these days!

It was awkward to drive on the right side again, which felt driving on the ‘wrong’ side after driving on the left side for so long (since Pakistan). But Don got used to it quite quickly; accept for the one time he took the roundabout from the wrong side ;-)

We were quite excited to be in Rwanda, the country which is also known as ‘ The land of a thousand hills’. The mountainous scenery was just stunning! But still not many travelers are crossing the border into Rwanda, because of its recent dark history. During the Genocide in 1994 more than one million Tutsis got butchered. But Rwanda and their people recovered quite quickly and the country is stable nowadays.

The villages we passed were all looking well maintained. It seems that everybody was actually living in a house and the shops were looking like ‘real shops’; all nicely painted and with decent sign boards. On the street it was quite crowded. Everybody is walking on the streets, some of them had a bicycle or even a motorbike. Children ran towards the road to wave at us and yelling Mzungu! We hadn’t heard that so frequently ever since Malawi.

Plastic bags are forbidden in Rwanda, so you’ll not find them anywhere. If you do your groceries they will put it in a paper bag. It’s actually a good thing, but we did notice a lot of logging. Pretty sure that the people cutting the big trees in their village for wood hasn’t got anything to do with that, but it makes you think.

After 10 hours of driving we finally reached Kigali, the capital of Rwanda, and camped at the only campsite in town called ‘’One Love’’, which was nothing more than a parking place. We were so tired that we went straight to bed after having our dinner.

The next morning we were lazy and watched the movie Hotel Rwanda on our laptop, which was even more interesting to see again now we are here. After having some home-made apple-cinnamon pancakes we went to the mall to look for a supermarket and a bank. There we happen to meet the crew from ‘3 op reis’ a Dutch television program about travelling. They were shooting an item on Rwanda. Wish we could do something like that for a living!

It took us a while to get us some money, since you are not able to withdraw money from an ATM in Rwanda. Some machines are now accepting VISA, but since we only have our MAESTRO/CIRRUS or MASTERCARD we only could get money if with would withdraw from our credit card inside the bank. Only a few banks offer this service, so once we found one with a good rate we could queue up. Before we knew it  a half a day went past.  We did some shopping at the Nakumatt (supermarket) and went to the famous Hotel des Mille Collines (also known as ‘’Hotel Rwanda’’). It was a bit weird to be in this now fancy 5 star hotel and drinking an ice cold beer and try to imagine how it was like back then.

That night we spent the night on the parking of Okapi Hotel. The next morning we found out they had free wifi and got sucked into our laptops for the rest of the day. The following day we decided to drive to Lake Kivu and eventually stayed on the parking of Moriah Hill Resort in Kibuye after negotiating about the price. Even though we camped on the parking we really enjoyed our stay. We could use their free wifi (again!) and the toilet in the restaurant and enjoyed the amazing view over the lake. We even could see DR Congo on the other side. Unfortunately all the rooms were fully booked because of Easter and so we couldn’t use a shower. So we used the lake to bath.

The weather was beautiful so we decided to stick around for another day before heading to Gisenyi.
The road to Gisenyi was really bad and it took us 4,5 hour to cover 90km, but it was a lovely route through the mountains (the scenery was amazing) and lovely tiny rural villages.

In Gisenyi we stayed at La Bella, where we could camp on the parking. But the following morning a local was literally waiting for us to wake up trying to sell some souvenirs. It was 8am and just got out of our car and there he was standing with his wooden sculptures; Madam, please have a look at my sculptures. Do you want to buy anything? Well, that’s the downside of not having camping facilities in Rwanda. This time some other guests offered us to take a shower in their room, which was really kind.

We had seen enough of Lake Kivu and so we decided to drive to Musanze where we stayed at Kinigi Guesthouse (again on the parking). We went straight to the gate of Parc National Des Volcanos to see if there were any spots left for the following days to do some gorilla tracking. Not a problem because of the low-season. We even could go the following morning, but unfortunately for us, not a discounted rate. We decided to spend the 500 US each (ahum).  That night, Jenn was so excited that she couldn’t sleep.

We had set the alarm clock at 6am and at 7am we were present at the gate. After some complimentary tea and coffee, the guides arranged the groups. Each group of max 8 persons went to see a different Gorilla family. We went to the Sabyinyo Group, which has the largest Silverback of the world, weighing 220 kg. The track shouldn’t be too tough, which was good thing since Jenn’s ankle was not fully recovered yet.

We had to drive ourselves to the point where we should start our tracking, but just when we were about to leave a group of 4 friends noticed that they locked themselves out of their rental car. Now we only had two cars since there was no other car available and all the other groups had left already. Besides the eight of us there were also two guides. Eventually, we decided to take 2 of the girls in our car with all the bags and all the others squeezed in the other car. But this car had problems with the radiator and if it couldn’t get worse after 5 minutes driving it couldn’t go any further. .. Sure thing we couldn’t bring 10 people! It took a while before we got some motorbike taxis organized before we could move again.

We started our tracking at 9am, but had to walk an extra 30 minutes to the next gate, because the motorbikes were not able to reach there. From that gate the tracking got rough; we walked 2,5 hours through bamboo, jungle and mud. When we finally got there we saw a Silverback just sitting there and all of a sudden the big Silverback came as out well. Truly amazing! We even had the chance to get to see the whole family when the rain started to clear up. We were only allowed to stay for one hour, but since it was raining when we arrived we could stay 30 minutes longer. The gorilla tracking is really expensive, but definitely worth it if you ask us.

The following day we head back to Kigali and had a great evening with Mo & Tonga and friends, who we met on the Gorilla tracking, and invited us over for dinner.

It was almost the 30th of April, which (for our Dutchies) means celebrating Queensday! To see if the Dutch community in Kigali organized something to celebrate this national holiday we contacted the Dutch Embassy. It appeared that we just missed the official party, but we were more than welcome to celebrate the ‘’children-edition’’ that Saturday. So we could have Dutch cheese, ‘rookworst’, ‘leverworst’, ‘poffertjes’, ‘bitterballen’, ‘ontbijtkoek’, ’haring’ and free beers after all! Yes, we had lots of fun and it turned out that our contact person at the embassy had done a similar trip some time ago and was a Landrover enthusiast.  Johan invited to stay another night, so it felt being back in The Netherlands for a night of two. 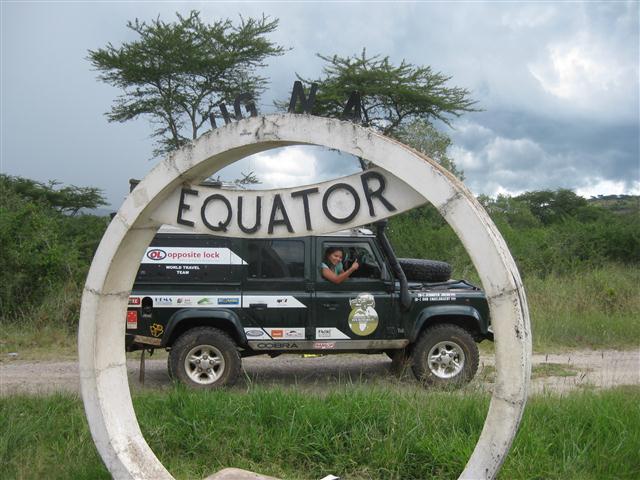 After having spent 13 days in Rwanda, we crossed the border to Uganda at Gatuna.  It was really crowded at the immigration on the Uganda site. Fortunately we found a way to skip the large queue (without bribing for those of you who are wondering). The first days we spent at Lake Bunyonyi. We could camp just beside the lake and enjoyed the local crayfish with avocado!

Uganda is as mountainous as Rwanda. The scenery is just beautiful! On our way to Fort Portal we crossed the equator. At Lake Nyabikere (near Fort Portal) we stayed at a nice campsite with a spectacular view called Chimpanzee Forest GH. The following day we drove around the crater lakes and went up to the viewpoint ‘on top of the world’, where we could see all the crater lakes. The muddy back track to get back to the campsite was a real challenge.

In Kampala we met up with Coen, a Dutch guy who runs his own travel agency Matoke Tours. It was really interesting to have a chat with him since he is organizing nice trips in and around Uganda.
Luckily at the time we were in Kampala there were no demonstrations.

From Kampala we drove to Jinja, where the source of the Nile is. We stayed at a lovely place called ‘The Haven’ which just has a stunning view of the Nile. From here we crossed the border to Kenya at Malaba.

The roads and traffic in Kenya was just horrible. There were a lot of trucks on the road which had damage the road quite badly and people are overtaking you whenever it’s possible or not possible. They don’t really seem to care. 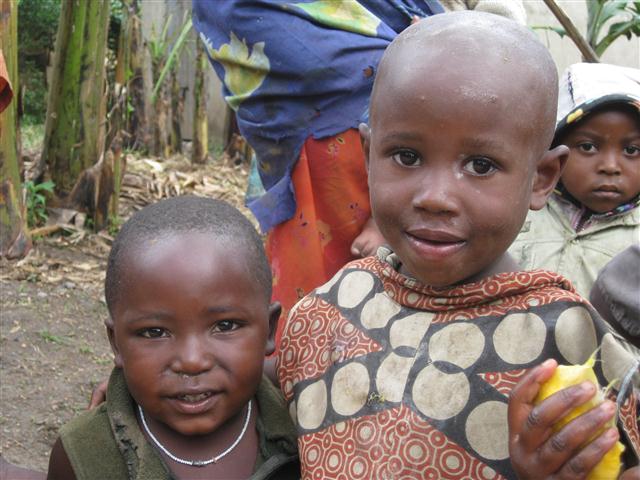 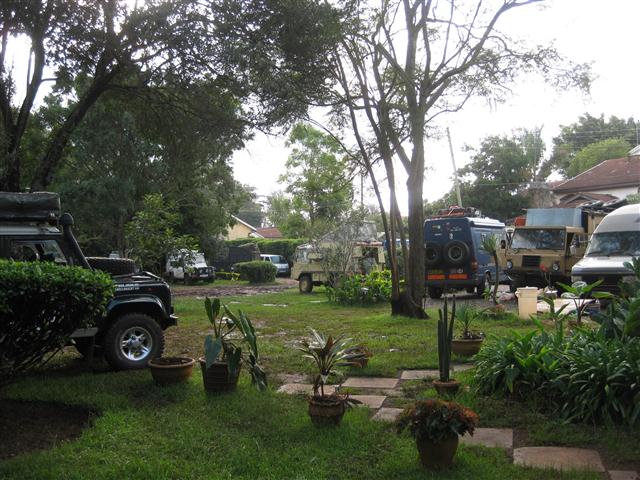 On Thursday 2th of May we reached the famous overlanders hide-out Jungle Junction. The next day the first thing we did was sending our passports back home in order to get our Ethiopian visa. When we were in Malawi we heard that they don’t issue the Ethiopian visa any longer in Kenya and surrounding countries. A lot of travelers got stuck at Jungle Junction because of this. The only way to get a visa is either to fly in to Addis Abeba (capital of Ethiopia) or get your visa in your home country.

So we sent them on Friday 13th (!) and fortunately we got it back this Friday, which was only a week later. This morning we just applied for the Sudanese visa and can pick it up tomorrow afternoon. We are planning to leave Jungle Junction on Wednesday. We would like to take the Lake Turkana route to Ethiopia, since the road to Moyale seems to be the worse ‘road’ in Africa where many many overlanders have a breakdown. Keep your fingers crossed for us!

“A good traveller has no fixed plans, and is not intent on arriving.” — Lao Tzu