When we drove into Tanzania we immediately noticed the difference; villages are bigger and thus more crowded. And the locals seemed a bit grumpy, not as friendly like in Malawi. We spent the first night at Kisolanza-The Old Farm House, one of those overlanders hide-outs. The road to Dar Es Salaam passed through Mikumi National Park, where we spotted a lot of wildlife and, for once, didn’t had to pay for it!

The closer we got to Dar, the more trucks we came accross. Unfortunately it wasn’t  easy to overtake, so it took us a bit longer to reach the capital. The first thing we did was a pit-stop at the Shoprite.  We contacted Marieka, who we met on the ferry to Zambia, to see where she was staying. We decided to pay her a visit, took the ferry to Kigamboni and ended up staying at Mikadi Beach. A lovely campsite, but where they only use salty water. Not just in the swimming pool, but also for the showers.

On the 3rd day we decided to go to Zanzibar. We could leave our Landy at the campsite and took the ferry to Zanzibar. Zanzibar is a beautiful relaxing island just 2 hours from Dar Es Salaam. It has white sandy beaches and turquoise waters. We spend 4 nights here, enjoying the night market with lots of seafood and the famous Zanzibar pizza. We rented a motorbike to go to the East coast and see some Red Colobus monkeys and enjoyed the space of our rooms with own bathroom and air-condition. It felt like a small holiday…

From Dar we drove to Bagamoyo, where we met a Swiss couple driving their 110 Defender to Cape Town in 1 year. We shared stories and information and had breakfast together. Too bad we were not heading the same way and travel a bit together. www.reiseglueck.ch

At Peponi Beach in Pangani we met a lot of other overlanders. Mostly families traveling in trucks who were heading towards South-Africa. Among them was a Swiss Family who we hope to meet somewhere along the way while heading North. 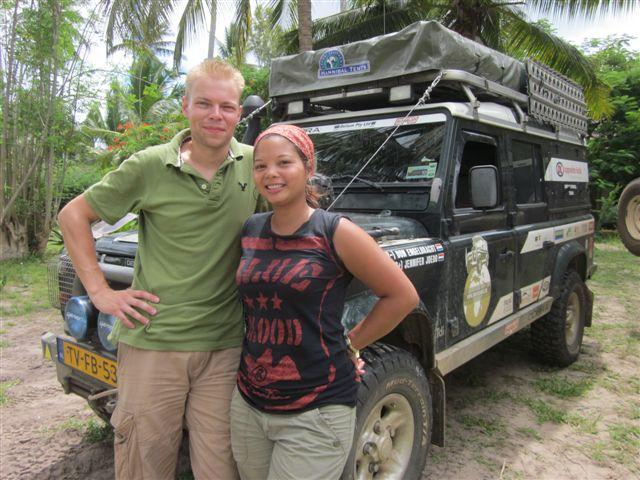 From Peponi we drove to Moshi, saw a glimpse of the Kilimanjaro and continued to Arusha where we serviced our car. We met a German woman, Sandra, and a Canadian girl Rebecca with who we stayed for a couple of days. In Arusha we stocked up again at the Shoprite and went off to Ngorongoro National Park.

Since the permit is valid for 24 hours, we entered the park at 3pm, so we could enjoy the evenings as well as the mornings in the park (usually the times you get to see more game). We didn’t go into the crater, since it would set us back an extra $200 on top of the already hefty park fees. That night we camped at a public campsite inside the park, where they charge you a ridiculous rate of $30 pp for nothing more than some toilets and cold showers. We didn’t see much wildlife the first day, but the next day it was much better. We saw lots of bucks, zebras and elephants and even spotted a lion that was sleeping under a tree. 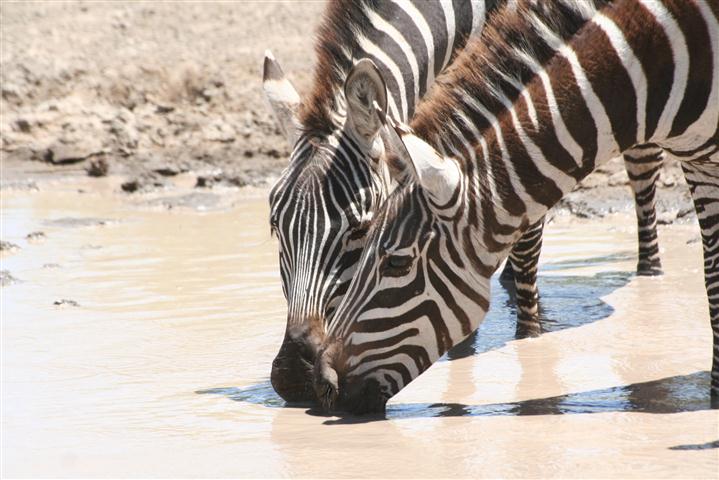 We entered the Serengeti NP, which is situated next to Ngorongoro NP, at midday. It took us a while to reach Seronera, due to the corrugated roads. Some of the worst roads we came across since we are in Africa. We hate it and so does the Landy, so it seems.

We were overtaken by a lot of Safari vehicles in a hurry. Following them we were just in time to see a leopard climbing into a tree with his catch, a gazelle! How lucky that was.

In the Serengeti we saw even more game; hippo’s, elephant, bucks, hyena, giraffe, zebras, wildebeest and buffalo’s. While driving we were harassed by the Tsetse flies. Seeing a big object they think you are a buffalo and therefore they want a piece of you. Driving with the windows (slightly) open is not an option. They will find their way in and a bite is quite painful. Before we exit the park we had lunch at the gate and a baboon sneaked up on Jenn while she was getting food out of the fridge. The freightless monkey climbed on her back, snatched the bread and ran away. It happened so fast, leaving Jenn behind a bit puzzled.

In Mwanza we found a nice spot on the beach at Tunza Lodge. We met a Belgian pilot who was living there and he invited Don to do some dirt-biking the following day, while Jenn was getting rid of all the dust and mud on the Landy from the Serengeti.

On the 20st of April we crossed the border into Rwanda…

“A good traveller has no fixed plans, and is not intent on arriving.” — Lao Tzu